New nuclear power in the US has proven expensive so renewable energy (RE) advocates are pointing this out with glee, with little care for what it means in terms of climate change. ”New nuclear has lost on economics.” That’s their story, and there is some truth to it, obviously. However, just as solar power costs are falling, nuclear costs would fall in series production. Could nuclear actually prove cheaper in a full-scale transformation of US electricity generation? The answer is yes and this post will elaborate on such energy endgame scenarios! (My blog is otherwise Swedish-language, but I made an exception for this post. Please let me know if you’d like a Swedish version as well.)

The chart below is using standard 20% cost reductions per doubling of cumulative volume produced (this is called Swanson’s law for solar, but is a more general feature of all industrial scaling). For solar and wind, it starts with the 2017 values for global generation and Lazard’s mean values for costs. As Lazard use world class solar siting, costs are also provided scaled to a US capacity factor more indicative of e.g. the populous Eastern US. For nuclear power, the chart starts with the two new AP1000 reactors that have planned completion dates in the early 2020-ies. 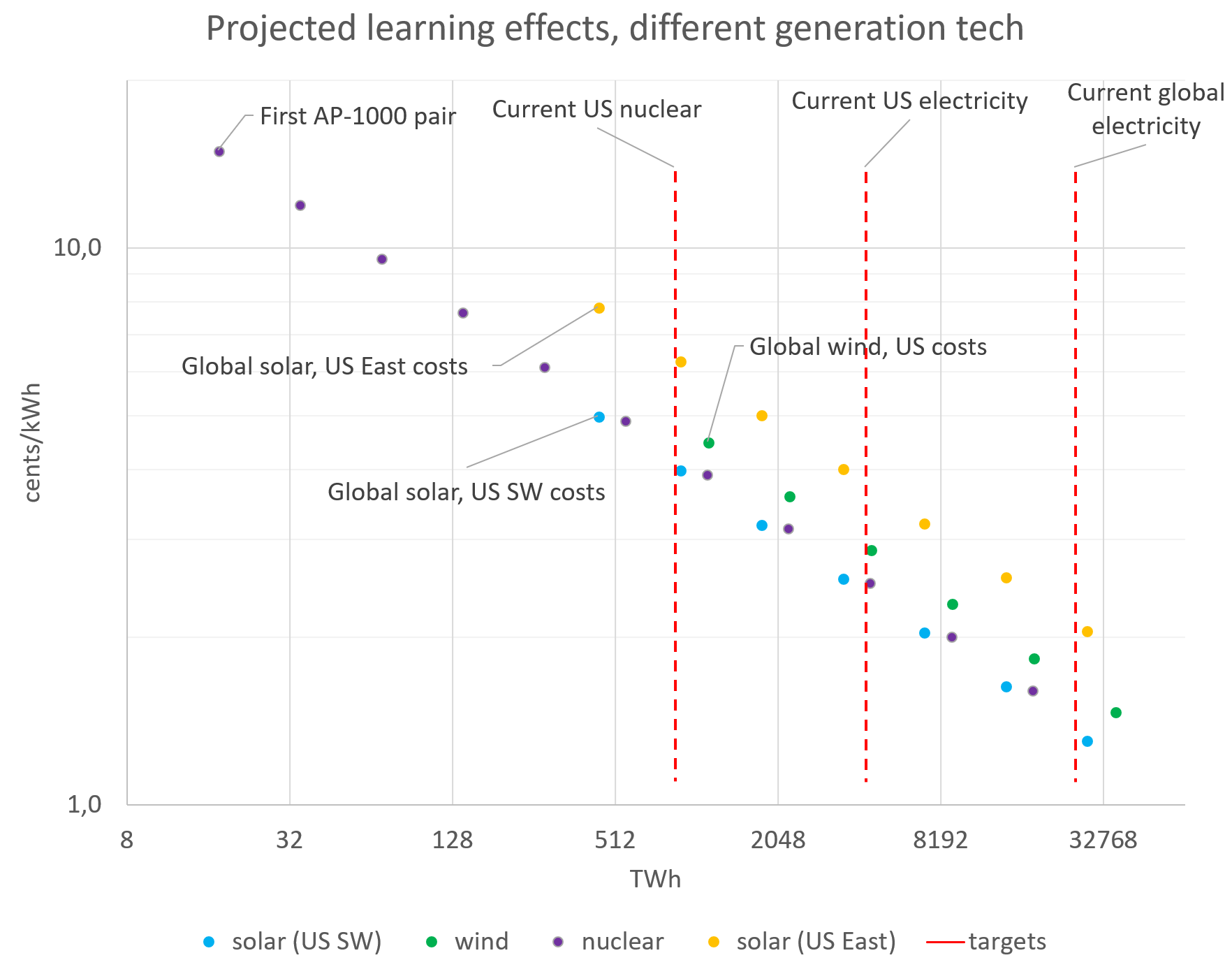 (A number of possible objections to this graph will be treated under a separate heading below.) As can be seen, 16 reactors could get US reactor costs down to current Eastern solar costs. If the current US fleet is replaced by around a 100 reactors, current US wind costs can be met. Generally, nuclear could be cheaper than a similar cumulative volume of solar and wind, and this is before taking account of the huge additional costs of a high-penetration intermittent RE grid, such as storage, continent-wide grids, curtailment and so on. The graph shows that a full-scale transformation of US electricity by nuclear power could have costs down to 3 cents/kWh.

The two new AP1000 reactors now under construction in the US are using a new design, are built with immature supply chains and are navigating untested and partly unknown regulatory terrain. However, the AP1000 design makes extensive use of modularization of plant construction. The idea is to perform more of the work in factories and less on the construction site, and to allow a lot of the construction site work to run in parallel. A stated goal of the design was to have a plant construction time of 36 months. The current builds are scheduled to be done after about 9 years, however. Utter failure?

No, well, disappointing perhaps, but what could you expect when you build something for the first time? It should be obvious that for any product, you can’t produce the very first item you need faster and cheaper by first building a factory to produce it in. Nor can you hope to  timely and efficiently assemble a complex product in parallel on the first attempt with inexperienced personnel. The Chinese, however, has managed to build n-th of a kind reactors in less than four years without similar careful design to allow for modularization, factory manufacturing and construction parallelization. My own Sweden has historically reached such short construction times as well, and so has other countries for their most successful builds. It’s provably feasible to go below 4 years! Having personnel at hand for only a third of the time will obviously have a major impact on total salaries paid. It will also greatly reduce the interest accrued during the construction period, which has a huge effect on LCOE (as Lazard is assuming quite high rates).

Objection: Solar is cheaper than that. I’ve read about far lower PPAs!
Answer: Yes, but such PPAs are based on, and even themselves constitute, explicit and implicit subsidies. Lazard’s LCOEs are higher because without the de-risking provided by the subsidies and the guaranteed prices, interest rates that would be needed for bankability would be far higher than they currently are.

Objection: Nuclear is already cheaper than that.
Answer: Yes, the Chinese nuclear FiT is lower than that for Chinese solar. Also the Finnish industry is going for 5 cent nuclear power with their next nuclear plant, but they finance it at lower interest rates with Russian help and they don’t go for a first-of-a-kind plant. Even the US Vogtle costs are arguably lower than in the graph. But again, high interest rates assumed by Lazard are not taking account of the de-risking provided by government guarantees and tax breaks. So that’s why Lazard’s LCOE for the US is pretty high.

Objection: Nuclear shouldn’t start at 17 TWh. It’s a mature technology that’s producing more than 2000 TWh annually every year.
Answer: Learning effects have been fully rolled back in the US by a more than 30-year construction hiatus, unravelled supply chains, new design blueprints and revamped regulation. So learning is starting anew and the previous chapter outlines a few reasons why there’s a huge cost reduction potential from this starting point.

Objection: Nuclear doesn’t have a 20% learning rate. It has negative learning!
Answer: This is simply not true historically. At times, with series production and stable regulatory environments, learning effects has been had. Nuclear power is not magical. All industrial products have learning if you scale with determination.

Objection: The nuclear curve starts at a US starting point and the solar/wind curves start at a global starting point. Isn’t this unfair?
Answer: Well, the costs are all US according to Lazard. The volumes are global for solar and wind and local for the US, but OTOH, the AP1000 had no completed reference plant anywhere at construction start, so the volume could be seen as global too.

Objection: The US costs could be lower if a lot of AP1000 reactors could be sold outside of the US, helping at least with learning for the manufacture of components.
Answer: Yes, true. But then you’ll simply look a bit further down the cost curve.

Objection: Solar and wind costs are not comparable to nuclear costs because nuclear power is worth more. It’s providing baseload power that has higher average per-kWh-value in spot markets.
Answer: Yes, that’s true. And solar and wind has more external costs for balancing, and is far more difficult to use for deep decarbonization.

Objection: There’s not enough cheap uranium to feed a huge number of nuclear plants.
Answer: There is, easily, but that’s a topic for another blog post.

Objection: Solar and wind are cheap enough, so why take the risk of nuclear power?
Answer: Nuclear accidents are overhyped and actually quite mild, but that is also a topic for another blog post. More importantly, solar and wind may look cheap enough on a per-kWh basis in windy/sunny locations, but, again, deep decarbonization requires a lot more for these powersources. Lazard shows almost double solar costs when you bundle a solar plant with just two hours worth of battery storage.

Objection: Nuclear is too slow. We need to get rid of fossils now.
Answer: Nuclear has so far, in pioneer countries, scaled faster than solar and wind has in its pioneer countries. France decarbonized its electricity in less than two decades with nuclear. True, to get these learning effects really going, we can’t do all reactors in parallel, but mainstream forecasts don’t see any quick RE solution either.

Even if the new builds in the US obviously isn’t a financial success, there’s a clear and rational path forward for a determined reactor build effort. The US can, on it’s own, drive costs down sufficiently for the endgame to be superior to that for RE. Most smaller countries however need to tap into pre-existing industrial learning effects of larger nations, as they can’t reach the volumes needed to drive industrial learning very far. A lot of countries are doing just that, with UAE being successful with Korean builds, Russia having a number of reasonably priced nuclear exports, and China starting to compete as well. The rumours of nuclear’s death have been greatly exaggerated.